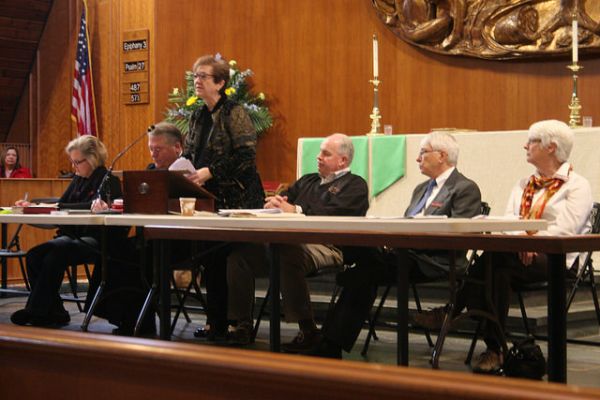 The Vestry is the elected lay leadership of our church, who act under the bylaws of our parish:

The duties of the Vestry shall be to take charge of the physical properties of the Parish; to attend to and regulate its temporal concerns; to provide for the support of the Rector, and for the staff persons whose employment has been authorized; to act as helpers to the Rector in whatever is appropriate to laypeople for the furtherance of the Gospel.


Three Vestry members are elected by the congregation each year during our annual meeting. Members serve three-year terms.

The Junior Warden is elected by the Vestry and is generally in charge of the church's physical property. This is also a one-year term.

Other officers can be Vestry members or members-at-large elected by the Vestry.

The remaining vestry members serve in leadership roles on all committees of the church. These assignments change each year with the addition of newly-elected vestry members.

The Rector appoints the Executive Committee to serve as an advisory committee to the Rector. It often consists of our Senior Warden, Junior Warden, and Treasurer, who serve along with our Rector. Others may be appointed at the discretion of the rector.

The Vestry meets on the second Tuesday of each month at 7 p.m.


Share this page: Vestry
Who We Are Clergy & Staff Vestry

Donate Online Other Ways to Give