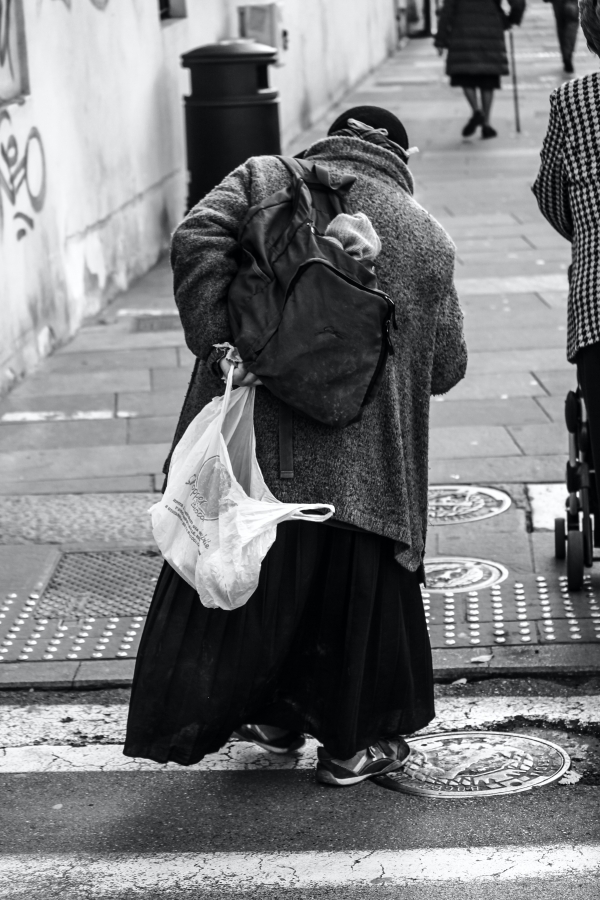 Well into the fourth year of ministering to the homeless downtown, we continue to encounter new situations. This past Sunday, as we got out of our cars on Tucker, close to St. Patrick’s, a young man came dashing across the street, unsteady on his feet, and ended up face down at my feet. He had obviously overdosed on something, not opioids, and was completely helpless. We, Laurie and myself, got him in a seated position, leaning against my car. We called 911 for assistance. They responded, and shortly an ambulance arrived accompanied by the fire dept. and police. The medics handled the situation professionally and respectfully. Lou, the young man, was stabilized and taken to the hospital. We continued distributing hearty breakfasts to our hungry friends who had waited patiently.

Breakfast consists of a pudding or fruit cup, hard-boiled egg, sandwich of meat, mayo, cheese, and lettuce with two cherry tomatoes on the side (made fresh early that morning), homemade pastry (made by Laurie), banana, and crackers. During this time of covid, face masks are always included. Last but not least, a candy kiss.

We have been there every Sunday morning during this frightening time. We missed the first two weeks of assessing the situation.

The ministry began with food. Early on, while getting to know the area, I saw a man dumpster diving in an open alley next to a vacant lot. I drove up to where he was slowly so as not to frighten him. He was extremely thin, and may not have had anything but the ragged shirt and pants he wore. I offered him breakfast.

As I left the gentleman at the dumpster, I realized his needs reached much farther than food. I then began carrying hygiene items in my trunk. Then the need for clothing became apparent. So, socks, underwear, skull caps, jackets and coats, blankets, towels, backpacks, shoes, etc., became part of our outreach.

Every now and then someone finds a way to get off the streets. If they see us before they move on, they can hardly wait to tell us and thank us for seeing them through hard times.

Learn More about our Stewardship Campaign

Pledge Online will be available soon.

Grace Church established Perpetual Grace to recognize members and friends of our parish who have made a planned gift commitment to Grace Church in their will or estate plan.

You can become a Perpetual Grace member by informing us that you have included The Grace Legacy Fund in your estate plan. Just fill out the Perpetual Grace Declaration of Intent Form and return it to the church office to clarify your intentions.

Our Journey Continues… is a capital campaign designed to provide a permanence to the care of our buildings and grounds. The majority of the money raised by this campaign will add to our Legacy Fund for the care of our facilities in perpetuity.

Our goal is to raise $1 million.